A poorly executed exit from the EU has the potential to set back London’s competitive advantage.

More than 10 years on from the great financial crisis (GFC), Central London remains the only UK market where commercial real estate (CRE) assets have recovered all of the value lost in 2007-2009. Central London shops are 93% higher than their June 2007 values, London industrials are 47% higher and Central London office values are 25% higher. Throughout the rest of the UK the value of commercial real estate remains below its 2007 peak. The solitary exception to this rule of thumb is South East industrials where values are now 17% higher than their peak in the previous cycle.

Similarly, London open market rental values for all property types, together with South East office and industrial rental values, have exceeded the levels prevailing before the GFC. However, throughout the rest of the UK rental values have at best stagnated; and retail rental values have declined, in some cases, sharply. Shopping Centre rents are 17% below and Rest of UK Shops are 26% below2007 values. The lopsided performance of UK commercial real estate reflects the unbalanced nature of economic recovery post GFC. The UK economy is now 9% larger than at the peak of the last cycle. But London’s economy has grown by 19% since 2007. This is almost twice as much as the next strongest regional economies of the South East and West Midlands. And, the regional economies of the North East and North West have only grown by 5% since 2007; representing an annualized rate of 0.5% a year for the 9 years to 2016.

London, of course, is the top ranked global financial centre. The top European centre outside the UK is Frankfurt at number 20 while Paris is number 24. The next best ranked UK centre is Edinburgh at number 43 and Glasgow at number 49. No other UK city makes it into the list compiled and published by yZ/Yen Group in London and the China Development Institute in Shenzhen.

The UK economy is dominated by financial services. Finance, Real Estate and insurance represent 47% of the UK economy. And, 34% of these activities are undertaken in London. Asset managers in the UK oversee £2.6tn of assets for overseas clients. This is larger than the size of the whole domestic economy of the UK which was valued at £2.0tn at the end of 2017. The UK in turn dominates the European asset management industry (see Chart 1). 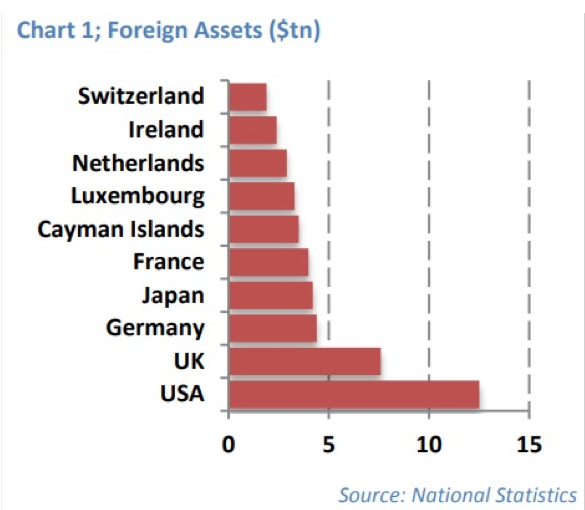 But there are widespread concerns about the impact of Brexit. Hopes for a stable future basis for London’s financial services and continued access to EEA markets after Brexit rested on Mutual Recognition and Delegation.

The delegation regime allows funds to be domiciled and regulated in one EU country, while being managed and marketed from London. However, as Paris, Frankfurt, Dublin, Luxembourg et al fight for pieces of London’s financial services, the EU has warned that fund managers would need substance in the form of offices where funds are domiciled if they wanted to continue to use delegation rules.

By pushing for Mutual Recognition, The Treasury sought to replicate the current single market passporting arrangements by another name. It appealed to many financial service groups as it purported to give the UK the freedom to change its rules as it saw fit, potentially for competitive advantage, while retaining market access to the 27 EU members. Unsurprisingly, this arrangement has proved to be politically unattainable.

The fallback model outlined in the recent Chequers’ White Paper relies on enhancing the EU’s existing model of recognising “equivalent”, but nonidentical, rules and regulations in deals with “third countries”. In particular, the regime needs to be expanded to cover securities trading and corporate lending and the EU’s right to rescind “Equivalence” on 30-days notice remains a big impediment to any future business stability.

Across the UK average initial yields remain 42 basis points (bps) above their June 2007 levels. As logistics assets benefit from the structural shift away from traditional high street retailing to on-line, London industrial yields are 148 bps below their 2007 level and South East industrials are 81 bps lower. Central London office yields are also 33 bps lower than the level achieved at the top of the market. Central London shops, however, represent something of an anomaly insofar as yields are now 25 bps higher than they were in June 2007.

If yields are a barometer of investor sentiment, it is clear that since the Brexit Referendum investors have adjusted the price they are prepared to pay for Central London shops and offices to allow for the as yet unknown risks of Brexit. Since June 2016, the All Property initial yield has hardened by 13 bps. However, the net initial yield on Central London shops has softened by 100 bps; and offices in the City, Midtown and West End have seen yields de-rate by 20 bps.

Tenant demand, reflected by the increasing rental values for Central London assets that Occupiers are prepared to pay, has shown a similar fall-off in the period after the Brexit vote (see Chart 2). 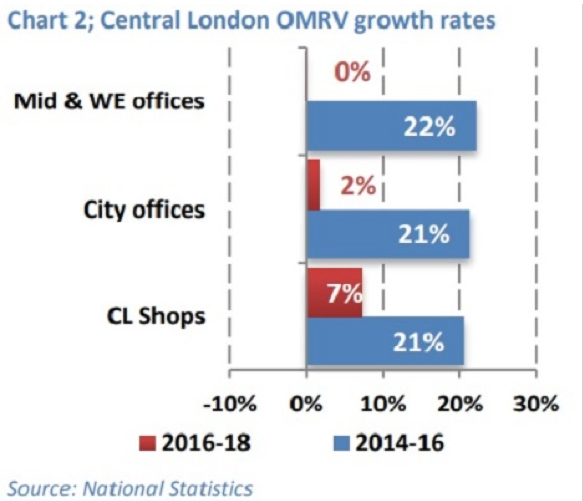 Brexit remains the biggest challenge facing London and the UK since 1945. A poorly executed exit has the potential to set back the competitive advantages London has accrued since the deregulation of financial markets in 1986 known as “Big Bang”.